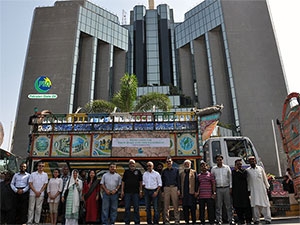 While Pakistan has unfortunately witnessed multiple natural disasters over the past few years, we take pride in the fact that PSO has proactively contributed in the humanitarian response and relief efforts and being a national company takes such actions as part of its civic duty.

PSO stood with the people of Balochistan, those who had lost their beloved ones and homes due to earthquake on September 24, 2013 by arranging tents, mosquito nets, ration bags and mineral water to provide relief to affected people of District Awaran, Balouchistan.

Pakistan experienced the worst of floods of its history in August 2010 which caused immense damage to life and property and left millions homeless. Pakistan State Oil responded to the needs of the people in the time of need and established a tent village at Makli, Thatta, provided cooked food and distributed relief items which included ration bags, tents, blankets and biscuits.

In September 2011, heavy monsoon rains affected millions in many districts of Sindh. In order to provide relief, PSO:

The 2007 Cyclone that lashed Pakistan’s southern coast crippled life in the affected areas especially in Balochistan. PSO as a good corporate citizen as always was at the forefront of relief operations and provided: